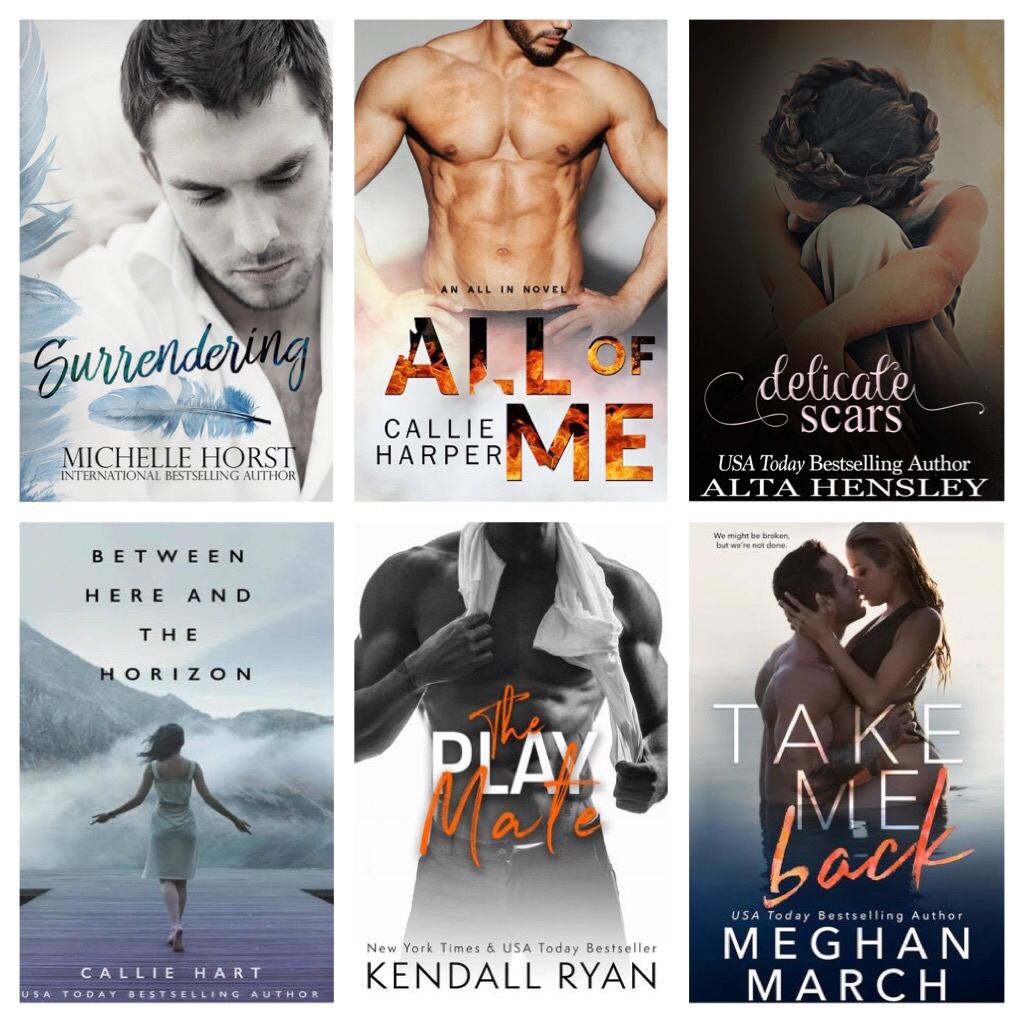 Hope you all are having a great week. There have been so many awesome books released in the past few weeks and there are some awesome authors releasing new books in the upcoming week.

Here are four books you should defiantly read (one is not a new release but I love it) and two new releases coming out this week. 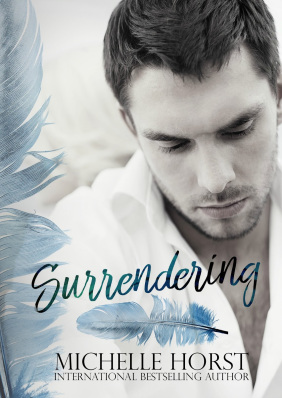 Liam Wright is the playboy at college. He’s part of the screw-crew.
It’s better to stay away from him, but you can’t tell your heart what to want.
He’ll judge me.
He won’t understand.
It’s easy to judge someone because of their past. I’m scared Liam will be just like all the other people.
But he doesn’t judge me. He comes into my life and refuses to leave. He doesn’t give up on me.
He helps me accept the guilt that lives inside of me, because it also lives inside of him.
We’re both damaged by the past.
We’re both looking for someone who will understand.
We’re both looking for someone we can surrender to.
But it’s hard surrendering all your broken pieces.
“Some feathers will fall along the way, but new ones will always grow back. It doesn’t make the old feathers less important because they kept you flying for so long – they kept you alive.”

In this book you have Mila and Liam.

At age 14, Mila escaped a cult that she had grown up in before being forced to be married but had to leave her little sister behind.

At age 16, Liam got out of a cult that his mother married into after his sister killed herself because she was going to be married off to an older man.

Years later, they meet at college but neither one knows about the others past. Liam is outgoing and a playboy, part of the “screw-crew” and Mila is quiet and keeps to herself. After Mila has a run in with another boy, Liam jumps into help her. Liam has secretly always liked Mila and finally tells her but Mila is scared because she doesn’t want her past to come back and hurt Liam.

Can two people whose pasts are so alike but so different find peace and love? Or will their  pasts be what tears them apart?

I loved this read. Michelle out did herself on this one. This story is full of heartbreak, love, death, sorrow, happiness, forgiveness. I loved Liam and how he only wanted the best for Mila. I loved how Mila always fought for what she wanted (not going to tell what she is fighting for), even when it was hard and even when others told her she couldn’t.

I knew this story would talk about some topics that can be difficult to discuss but those books don’t bother me at all. I think Michelle did an amazing job at telling both stories and the way she tied their stories together was fantastic. This story was beautifully written and touched my heart.

All of Me by Callie Harper 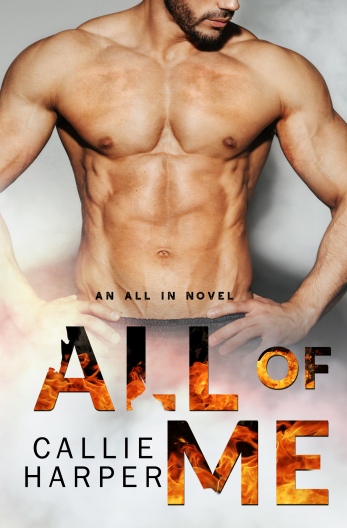 Seven years is supposed to change the way you feel.
Sophie’s not supposed to still dream about the way Liam touched her or the way they moved together. When she heads back to Naugatuck Island, she assumes Liam doesn’t even live there any more. Whatever he once felt, it has to have grown cold by now.
But Liam’s a firefighter. He knows better than anyone, never underestimate the power of a blaze. Those embers may appear cold, but nothing is ever as it seems.
Those embers? They’re just waiting to burst into flames.

This was a very sexy, intense read.

You have Sophie, a “retired” ballerina who has come back home to Naugatuck to try and start her new life.

You have Liam, a firefighter with a dark secret.

Sophie and Liam have a past. They dated when they were younger and it ended on rough terms. Liam and Sophie’s brother were in an accident together that severely injured her brother.

Now that Sophie is back in town, will they be able to avoid each other? (The answer is no)

Sophie and Liam play this back and forth game but will Sophie be able to handle the dark side of Liam? Will Liam push Sophie to far? Will he push her into the arms of another man?

This was a really good read. I enjoyed the back and forth between Liam and Sophie. I like how this wasn’t an insta-love story. I can tell Callie really put her heart into this. 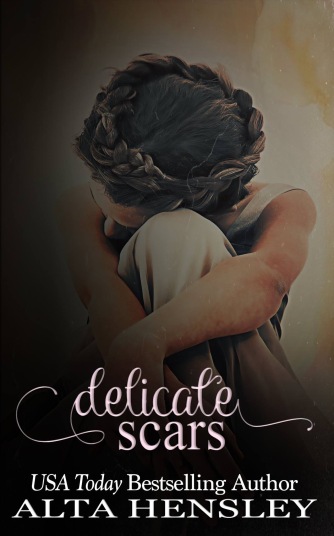 Is it possible to pick that one defining moment in life that fucked you up? Can anyone look back on their life and pinpoint the exact minute it happened? I used to believe that I wasn’t fucked up. I had absolutely no reason to be.
Until I met him.
Axel Rye.
Yes.
He fucked me up.
He really fucked me up.
It all started so simply. I only wanted to write a book about the dark, gritty world of nightclubs, booze, drugs, and sex. I didn’t expect to be sucked in to the point where I could no longer see the light. But I became weak. Axel Rye made me weak.
He was wrong in every way. He was a drug dealer, a criminal, and the kind of man your parents told you to stay away from. Yet, he became my drug, and I shook in need until my next fix.
I was delicate.
He was scarred.
But together…together we became delicate scars.

This book was a gritty, sexy romance with love, tears, and lies.

You have Quinn: Quinn grew up with a normal life. Her sister recently died and she decided to move to LA for a while to work on a book she was writing about the seedy life of nightclubs.

You have Axel: Alex is the son of a famous singer, a playboy, and he just also happens to be a drug dealer.

From the moment Axel spotted Quinn in a nightclub, he was hooked. “This girl was your typical girl-next-door-type of gal, clearly lost in a dark and dank place like this.” Quinn knew that Axel would be at that club. Her goal was to learn about him for her book, but things don’t always go as planned. After Axel saved Quinn from an unwanted man, their connection just kept getting stronger and stronger. But with the lifestyle Axel lived, it was only a matter of time before Quinn started using drugs and falling into the routine of his life. Everything looked perfect but looks can be deceiving.

Between the drugs, Jillian (you’ll meet her in the story), and Quinn’s lie about her real job, something has to give and when it does, it’s explosive. Can Quinn and Axel survive the “explosion” or will they go down in flames?

I really enjoyed this book. I love books that aren’t all sunshine and roses and this book met my expectations. I loved the connection that Quinn and Axel had. You could tell that he truly loves her and how he was willing to change for her. But when the “explosion” happens, you wonder if they will ever be the same.

I can tell this book was written with a lot of heart. Alta Hensley doesn’t shy away from the tough subjects in this book. She intertwines them into the story and makes the story more relatable to some and more mind opening to others.

This is the first book I have read by Alta Hensley and it won’t be my last. 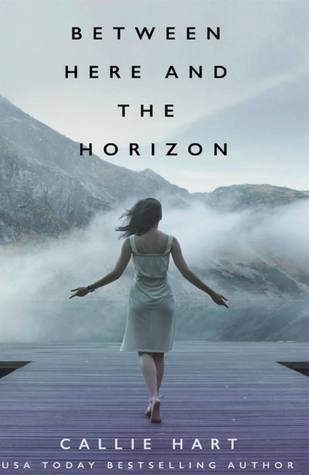 “You think you know me. You think you want to know me. But trust me, Miss Lang. Pursuing me will be the worst mistake you ever make. I’m broken beyond repair…
…and I take great pleasure in breaking everyone else around me.”
Ophelia Lang needs money, and she needs it bad. Her parent’s restaurant is going under, and ever since she lost her job teaching third grade elementary, scraping enough cash together to pay the bills has proven almost impossible. Her parents are on the brink of losing their home. The vultures are circling overhead. So when Ophelia is offered an interview for a well-paid private tutoring gig in New York, how can she possibly say no?
Ronan Fletcher is far from the overweight, balding businessman Ophelia expected him to be. He’s young, handsome, and wealthy beyond all reason. He’s also perhaps the coldest, rudest person she’s ever met, and has a mean streak in him a mile and a half wide. A hundred grand is a lot of money, however, and if tolerating his frosty temperament, his erratic mood swings and whatever else he throws at her means she’ll get paid, then that is what Ophelia will do.
Her new boss is keeping secrets, though. Awful, terrible secrets.
The ghosts of Ronan Fletcher’s past are about to turn Ophelia’s future upside down, and she can’t even see it coming.

I absolutely loved this book. I don’t want to give to much away but the different plot twists in this book made it amazing.

The relationship between the main male and female has so much give and take that sometimes you just want to yell at them and other times you want to root for them.

This was a wonderfully written book and it truly touched my heart. This will defiantly be a go-to book for me. 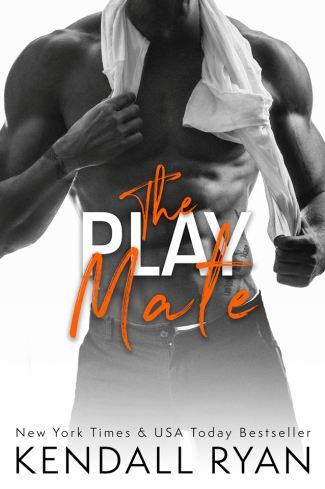 Smith Hamilton has it all—he’s smart, good-looking and loaded. But he remembers a time when he had nothing and no one, so he’s not about to mess up, especially with his best friend’s little sister. That means keeping Evie at arm’s length … even though the once pesky little girl is now a buxom bombshell. A sexy blonde who pushes his self-control to the limit the night she crawls into bed with him.
Evie Reed knows she’s blessed—with an exclusive education, a family who loves her, and a new job managing social media for her family’s lingerie company. But she wants more, like a reason to wear the sexy lingerie herself. She has just the man in mind to help with that. She’s crushed on Smith forever. Surely tricking her way into his bed will force him to see her in a new, adult way.
Except that when Evie’s plan leads to disaster, she and Smith must decide—ignore the attraction sizzling between them, or become play mates and risk it all. 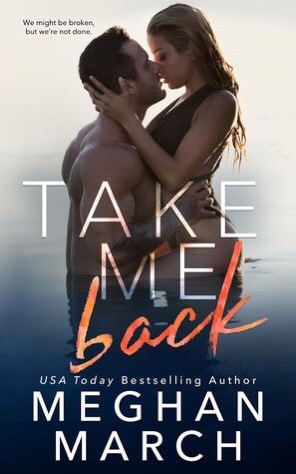 We fell in love on a beach, got married in paradise, and rode off into the sunset. It should have been perfect, but saying “I do” doesn’t guarantee a happily-ever-after.
Two years later, I barely recognize either of us behind the walls we’ve built.
It’s time to bring it full circle. Back to a tropical paradise. Back to find out if we can still make this work.
I’m not willing to give her up, but to save us, I have to risk everything.
Two damaged people.
Countless secrets.
The fight of our lives.
We might be broken, but we’re not done.