This book is not for the faint of heart. There are triggers in this book. You have been warned. 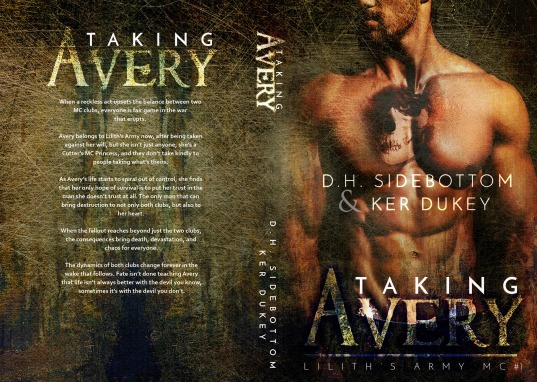 When a reckless act upsets the balance between two MC clubs, everyone is fair game in the war that erupts.
Avery belongs to Lilith’s Army now, after being taken against her will, but she isn’t just anyone, she’s a Cutter’s MC Princess, and they don’t take kindly to people taking what’s theirs.

As Avery’s life starts to spiral out of control, she finds that her only hope of survival is to put her trust in the man she doesn’t trust at all. The only man that can bring destruction to not only both clubs, but also to her heart.

When the fallout reaches beyond just the two clubs, the consequences bring death, devastation, and chaos for everyone.
The dynamics of both clubs change forever in the wake that follows. Fate isn’t done teaching Avery that life isn’t always better with the devil you know sometimes it’s with the devil you don’t.

What happens when your boyfriend gets killed by a motorcycle club, you get kidnapped, you get forced to marry a member of that club, and your dad is the president of a rival club? ONE AMAZING STORY!!!!!!!!

Slade (aka Frost) has to clean up his brothers mistake, again. That means he has to marry  a woman who’s dad is the president of a rival MC. A woman he doesn’t know and honestly doesn’t want to marry.

Avery is an “MC princess” except she was never treated like one. When she gets caught up in something that isn’t her fault, she realizes that she has to do what she has to do to keep the peace between the two MC’s.

This story was WOW!

Like I don’t have even know what to say.

It’s an MC story, so of course there is death and sex and cussing and more sex, but there is also heart and feelings.

I think that is one thing I loved about this book was the underlying story. That even when things in life are crazy, sometimes you can find that happiness. Sometimes that happiness comes from the most surprising places.

I absolutely loved Slade. He is a kick ass, sexy biker, but underneath his rough exterior, he has a really good heart.

And Avery is a hoot. She has attitude and is not afraid to speak her mind, even when it gets her in trouble.

They are like oil and water but in the best way.

Now I can’t WAIT for Finding Rhiannon. (P.S. I hope they write it sooner than later)