**This review will contain some mild spoilers**

When Ellis Earnshaw and Heathan James met as children, they couldn’t have been more different. Ellis was loud and beautiful – all blond hair, bright laughs and smiles. Heathan was dark and brooding, and obsessed with watching things die.
The pair forged an unlikely friendship, unique and strange. Until they were ripped apart by the sick cruelty of others, separated for years, both locked in a perpetual hell.
Eleven years later, Heathan is back for his girl. Back from a place from which he thought there was no return. Back to seek revenge on those who wronged them.
Time has made Heathan’s soul darker, polluted with hatred and the thirst for blood.
Time has made Ellis a shell of her former self, a little girl lost in the vastness of her pain.
As Heathan pulls Ellis out of her mental prison, reviving the essence of who she once was, down the rabbit hole they will go.
With malice in their hearts and vengeance in their veins, they will seek out the ones who hurt and destroyed them.
One at a time.
Each one more deadly than the last.
Tick Tock. 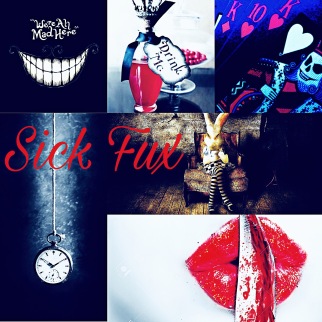 This book is like Alice in Wonderland, if Alice and the Rabbit played in blood and enjoyed  killing.

I was not prepared for what I got myself into with this book.

Ellis is a young innocent girl who meets a troubled boy names Heathan when he ends up coming to live with his dad who works on the estate she lives on.

From the very beginning, Ellis and Heathan had a connection. A connection that would be what saves them in the future.

Ellis and Heathan both end up going thought some terrible, sickening events. Events that would not only scar them both for life, but would make them the people that they became.

Heathan ends up being taken away, leaving Ellis to deal with her nightmares on her own. Years pass before Heathan is able to return for Ellis. But what he finds when he returns will shock him.

Without giving away to many spoilers, Heathen and Ellis will work together to find the people in their past who hurt them and make them pay for their sins. But it is not an easy task. Ellis is lost, she doesn’t know who she is anymore. Ellis is a shell of the girl he used to know. She is in her own little world now and he knows that in order to be with her, he needs to enter her new world, even if it is all in her mind.

“There was no Rabbit without Dolly. There was on Dolly without Rabbit” 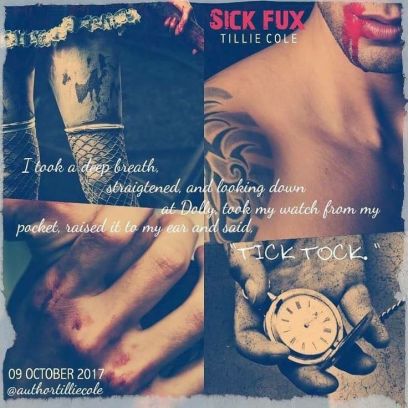 This book was way more than I could have ever expected. They storyline was so deep and so raw that it just sucked me in.

Ellis (Dolly) and Heathan (Rabbit) have such a connection that nothing, not time, not pain, not anything can tear them apart.

I am so excited to see if this book has a spin-off because there is AMAZING potential there for one.

Amazon & USA Today Best Selling Author, Tillie Cole, is a Northern girl through and through. She originates from a place called Teesside on that little but awesomely sunny (okay I exaggerate) Isle called Great Britain. She was brought up surrounded by her English rose mother — a farmer’s daughter, her crazy Scottish father, a savagely sarcastic sister and a multitude of rescue animals and horses.
Being a scary blend of Scottish and English, Tillie embraces both cultures; her English heritage through her love of HP sauce and freshly made Yorkshire Puddings, and her Scottish which is mostly demonstrated by her frighteningly foul-mouthed episodes of pure rage and her much loved dirty jokes.