It’s been a while since I have done a new releases post. Life has been crazy with work and family, but now that I am officially on Thanksgiving break, I have a bit more time on my hand.

Here are some new releases. Two of these I have read and the others are on my TBR.

Hope you find a new read for your Thanksgiving holiday!

One look at the sixteen-year-old, prim and proper town goody-two-shoes, Hennessy Hanes, and Tate Casey knows he’s in trouble. He knows he should stay away from the preacher’s daughter, but there’s something about her he’s drawn to, and he can’t resist the pull.
The more he gets to know her, the more he realizes that something isn’t right. He may not be able put his finger on what it is, but he’s determined to find out what’s going on with the girl with the haunted eyes.
Tate didn’t anticipate that someone else would be just as determined to keep Hennessy’s nightmare a secret, and he never realizes just how far that person is willing go to keep those skeletons in the closet until it’s too late.
With the very real threat of jail time hanging over his head, Tate leaves without a backwards glance at the town or the girl. The problem is that out-of-sight doesn’t necessarily mean out of mind, and it’s Tate who’s now haunted by his decision and memories of Hennessy.
***
Hennessy Hanes knows better than anyone not everything is always as it appears to be. After years of being on the receiving end of her squeaky-clean preacher father’s abuse, she seizes an opportunity to leave it all behind and runs.
Her only regret is that in walking away she loses any chance with the one person who tried to save her.
***
Fast forward ten years, and they’re both back where they started.
Tate was never a good boy, and it turns out that the man he’s now grown into isn’t all that much better. Anger is a living, breathing part of him, and there’s a court order forcing him to seek help from the one person he’s never forgotten.
Hennessy never thought she’d see Tate Casey again, and certainly not on her couch. But now it’s her turn to save him, and there are rules she must follow as his psychologist, not to mention a court order instructing her to help him manage his anger. If she doesn’t follow those rules, he’ll end up back in jail.
Tate Casey has never been a man who followed the rules, and Hennessy is no longer the straight-laced, timid preacher’s daughter she once was.
His hands may be tied, so it looks like for the first time in Hennessy’s life, she’ll be the one breaking the rules for the chance to finally get what she’s always wanted. Him. 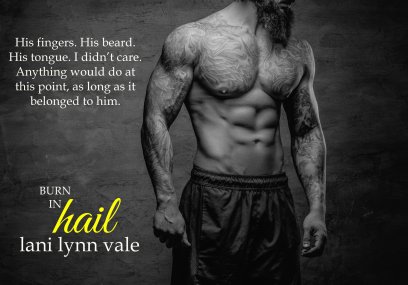 Burn in Hail (My Review)

I loved this book. Lani never disappoints and each character brings you more and more into the lives of these brothers.

Read the first two books to understand this book better but you can read it without the others. 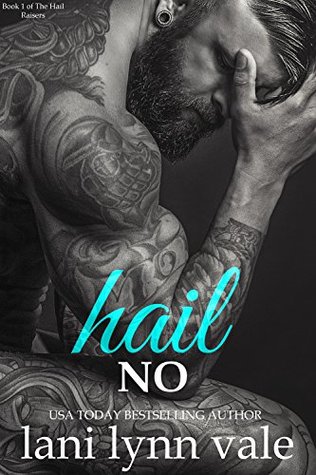 Evander Lennox doesn’t do anything he doesn’t want to do. At least, that is, until he’s sent to prison. The four years he’s incarcerated, he’s had no choice but to do the things he’s asked to do, when he’s asked to do them. And now, if he doesn’t, it will mean a one-way ticket straight back to hell.
Once he’s free, it takes him twenty-four hours to get his old job back, his dog at home where he belongs, and an understanding that people aren’t as forgiving as he once thought them to be. He’s just about given up hope of ever integrating back into society when a woman slams into his heart, literally and figuratively.
***
Kennedy Swallow just wants to belong somewhere.
When she was younger, her parents divorced, and chose to separate her from her twin. Fast forward fifteen years, and she’s finally getting to meet the family she’s always wanted to be a part of. To make that happen, she uproots her life and moves to the tiny town of Hostel, Texas—giving her almost everything she’s ever wanted.
Just when she thinks she’s making progress in winning her family over, she finds out that her twin is ill, and the only reason her family tolerates her is due to the convenience of having a free caretaker whenever they might be in need of one.
After a few eye-opening experiences, she quickly realizes that she’s being used. Vowing to herself that she’ll make the best of the situation, she begins to steel her heart. What she doesn’t prepare for is a man named Evander who sees that barrier as a challenge.
***
It takes Evander all of ten seconds while watching the woman on the floor, bleeding from her jaw, to realize that maybe life isn’t as bad as it could be.
This woman with her thrill for life, a crazy obsession with chickens, and a desire to be wanted, changes everything he thinks he knows.
But it doesn’t take long for him to realize that just by being around her, the people of the town have judged her guilty by association.
Her business suffers, and soon after, she realizes what it will mean to have him by her side—the loss of everything she’s worked so hard for.
Kennedy knows that Evander is worth it. Evander, however, decides that he’s not letting another person get hurt because he was stupid enough to care.

Hail No (My Review)

Everybody has problems. But Travis? Yeah, he has so many problems that he finds it hard to breathe sometimes.
He spends five years catering to his ex-wife’s every want and need—all to make it possible to continue to see his child.
He isn’t supposed to fall in love with a woman, but he does.
He isn’t supposed to find someone that is willing to put up with his ex-wife’s crazy antics, but he has.
He isn’t supposed to be happy, but he is.
And all it takes is his ex-wife finding out about his new-found peace for things to change.
***
Hannah saw him and knew he was the one.
All it took was one look into that haunted man’s eyes, and she was lost, never to be found again.
She thinks she has it all. His love, a new baby made with that love, and a house to raise their blended family.
She’s wrong, and Travis’ ex-wife is out to prove it.
***
Travis doesn’t deserve Hannah. All he’s done is hurt her.
She’s done everything in her power to keep everyone happy, but the more she tries, the harder his ex-wife pushes. Until one day, there’s nothing left to push.
Hannah leaves, and Allegra wins.
But Travis isn’t willing to let her have her way any longer.
He fights back, and only gets a bullet to the chest to show for it.

Go to Hail (My Review)

On the Way to You by Kandi Stiener

What makes you happy?
That was the question Emery Reed asked me the day we met, and I couldn’t give him a single answer. I could have said my dog, or my books, or yoga — but I just stared.
And then, I got in his car.
It was crazy to take a road trip with a stranger, but after years of standing still, he was my one-way ticket to a new life, and I wasn’t going to miss it.
We shared the same space, the same car, the same hotel room — and still, we were strangers. One day we’d be laughing, the next, we wouldn’t speak. Emery was surrounded by impenetrable walls, but I wanted in.
Discovering his journal changed everything.
I read his thoughts, words not meant for anyone’s eyes, and the more I learned about him, the harder I fell. It turned out nothing made Emery Reed happy, and I wanted to change that.
I earned his trust by violating his privacy, and as wrong as it was, it worked — until one entry revealed a darkness I never knew existed, a timer I never knew was ticking.
Suddenly, what made me happy was saving Emery from himself. I just didn’t know if I could.

This book was about finding yourself and finding that person you can rely on. This was a great read and a touching story.

On The Way To You (My Review)

He calls himself Spider.
I just knew him as the sinfully gorgeous guy with eyes of fire that fate sat next to me on the airplane.
I didn’t know who he really was…British rock star…my stepbrother.
He kissed me because he thought we’d never see each other again. We would.
Everyone warned me about him.
They told me he was ruthless and cold and screwed up.
They said he’d leave me with a hole in my heart.
Maybe I should have listened.
Maybe I should have built up a fortress to keep him out.
But I crumbled instead.
They say an unbreakable thread connects those who are destined to meet. If that’s true, then the moment he sat next to me, we were bound together forever.
He just had to figure it out before it’s too late… 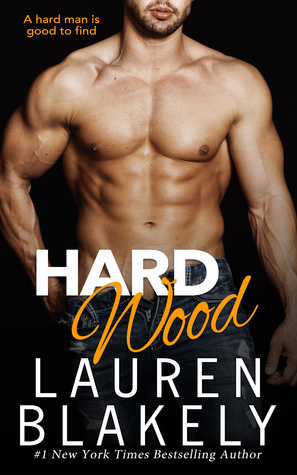 Women often say a good man is hard to find. And a hard man is even better.
That’s why I’m quite a catch– good, hard, loaded, and wait for it…I’m ready to settle down too. But the woman I want to pitch my tent with lives clear across the country. Neither of us wants to get lost in those woods. All I have to do is resist her for the week she’s in town.
I try. I swear I try. But yeah, that doesn’t work out.
And after one fantastic night with my good friend Mia, I’m ready to give her years of nights under the stars. What’s a few thousand miles when love’s involved? But there’s a hitch in my plans — she just hired my adventure tour company. If there’s one thing I’m committed to, it’s running a squeaky clean business. Number one on my list of iron-clad rules?
Don’t screw your customers.
But what’s a guy to do when she’s so hard to resist? How hard can it be to keep our hands off each other for a quick group tour down the hills and over the trails? I’m about to find out, and I have a feeling I’m going to need a new badge of honor because things are about to get very hard in the woods. 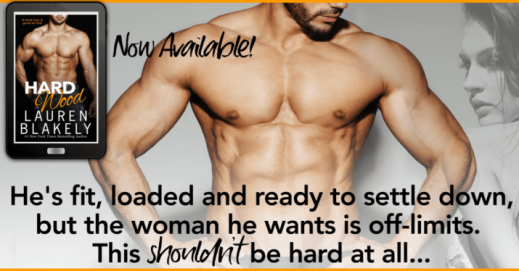 Never trust a man who answers the front door wearing nothing more than a pair of low-cut jeans and a panty-melting smirk.
That should’ve been my first sign.

I write about guys just like him for a living–sexy and charming, yet reluctant to get into a serious relationship. His body screams sex appeal, but his condescending personality makes him a classic f*ckboy.

And I want nothing to do with that.

Writing romance novels comes with its perks–traveling, meeting new people, creating characters from the voices in my head–but Ethan Rochester enters my life and rearranges all my preconceived notions about writing what inspires you.

One week is all it took. One week to realize that not everything is as it seems.
One week with the bad boy, and I wanted more.

**This is a complete STANDALONE novel–filled with plenty of humor, steam, & romance! 18 & up only due to explicit sexual content, language, and adult content.**