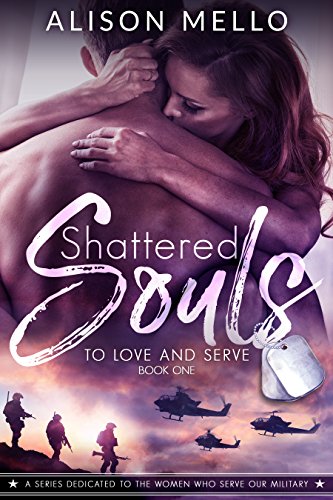 I left home a proud, strong woman, determined and eager to support my country. But I came back a completely different person.

I’m wounded, scarred, and nothing more than an empty shell. I’ve lost my ability to open up to those closest to me. Why? Because no one understands. No one knows the hell I’ve been through.

Every time I close my eyes the nightmares are there, waiting, lurking in the shadows, ready to torment me further. My only escape is the sting of alcohol, the burn that numbs my pain. Everyone sees it as a weakness, calls it a coping mechanism. I call it survival.

I’m a lost cause…until I meet him—a Boston cop with demons of his own, who knows what it’s like to be haunted by his past. He understands my pain, knows all about the nightmares, and makes me feel less…alone.

But we are both broken, tainted by our pasts. How can we heal each other when we’re both shattered souls?

This book is dedicated to all the women out there who have saved and are currently serving their county.

In this book you have Lexi, a combat vet, and Keegan, a Boston cop.

They both are battling their own demons and they enter into each others lives at just the right time.

Lexi is battling nightmares because of a mission overseas that went wrong. She thinks drinking is the only way she will feel better. Keegan had a terrible childhood and is battling his own nightmares. 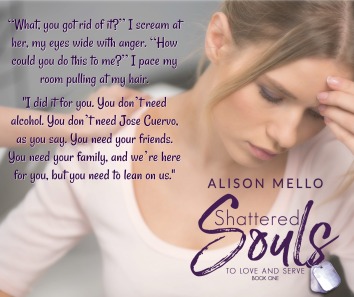 Will they be able to save each other or will it be too late and will one of them self-destruct?

I gave this book 3.5 stars. I liked the book but I just didn’t connect 100% with it. I think others will really like this book and connect to it, but it just wasn’t a 5 star read for me.

Alison has been writing for over a year now. Her debut book Finding Love (October 2015) was published by Siren Publishing. Her following books Needing Your Love (November 2015), Found My Love (December 2015), and Fighting for Love (January 2016) were also published with Siren to finish the Learning to Love series.

Her desire to see her books on shelves led to her next work Chasing Dreams (April 2015) She submitted it for publication with Limitless Publishing and was thrilled that it was quickly accepted. Excited to reach that goal, she moved on to the next series she had in mind and wrote Saved By a Soldier (June 2016), My Broken Soldier (July 2016), Forever My Soldier (August 2016), and A Soldier for Bella (September 2016).

Alison enjoyed reading as a child and found her passion for it again in 2011 when E.L. James’ Fifty Shades of Grey was released. Her love of reading was re-ignited and she continued reading other books in the same genre. In the summer of 2015, she decided to give writing a try and two weeks later Finding Love was born. As soon as she finished the first book, she began writing the second book in the series. Her third book was finished by the time Finding Love had been accepted for publication. Alison discovered she has a passion for writing and has spent the last year meeting new readers and sharing the love she has for writing.

Married to her own real life hero, Alison lives with her amazing family in Massachusetts where she was born and raised. She loves having her own personal inspiration right at home and when she’s not writing she enjoys playing soccer, basketball, and football with her son.

One thought on “Shattered Souls – To Love and Serve”