It was temptation that broke the sinner.

People say I have everything.
They’re wrong.
I may have looks, money, and privilege, but I don’t have the one thing that really matters, the one thing I crave: a woman with eyes only for me.
I’m searching for my woman—one who will fall to her knees because I’m her king. She’ll wear the crown of my tarnished name, and long for me when I’m not near. And when I am close, she’ll be naked across my lap, feeling the sting of my palm across her milky skin.
You could say I’m a sinner because I’d do anything to have the perfect woman—compliant to my every need and whim—and I’m envious of every couple who walks around naive to the luxury they have.

That’s why I joined The Elite, the most prestigious brotherhood in the south.
It’s the one place that will give me what I cannot have.
Only…the task assigned to me is too much for my jealous eyes.
Accept your sin wisely, for the tasks given to earn your place are not for the weak…they’re for The Elite.
Those who envy have no peace.
My name is Sabastian Westbrook.
I am Envy.

Sebastian is one of a kind.

After his parents died, Sebastian went to live with his uncle, who was not an upstanding citizen. Once he was with his uncle, he never wanted for anything. Except for love. He always wanted to be loved. 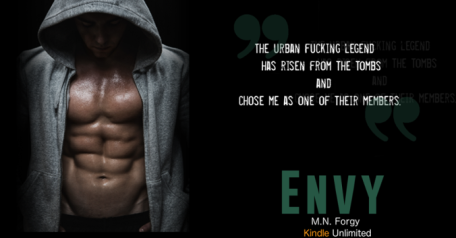 When his uncle gave him an ultimatum after an accident, go to college at St. Augustine college and find a way to join the Elite Seven, Sebastian really had no other choice.

Sebastian finds his way into the Elite Seven but it’s not all roses for him. And it gets more complicated when he meets Sabella, Sam’s sister. 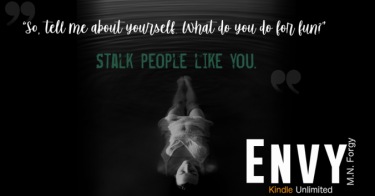 Sebastian is Envy for many reasons you will learn about as you read.

The reason I gave this book 3 stars was because I didn’t connect with Sebastian. He was an asshole and there was absolutely no part of him that I liked. Sometimes I like the bad guys, but not this time.

M.N. Forgy was raised in Missouri where she still lives with her family. She’s a soccer mom by day and a saucy writer by night. M.N. Forgy started writing at a young age but never took it seriously until years later, as a stay-at-home mom, she opened her laptop and started writing again. As a role model for her children, she felt she couldn’t live with the “what if” anymore and finally took a chance on her character’s story. So, with her glass of wine in hand and a stray Barbie sharing her seat, she continues to create and please her fans.