April was a pretty good month for me.

I read 10 books and most of them I enjoyed.

Onto God’s story and it is my favorite one so far.

Baxter Samuel Goddard (God) the fifth. The boy who had everything growing up and never wanted for anything.

You find out early in the story why God’s sin is Gluttony, it is because of this father. Everything with his father is alway in excess, no matter what it is. And in some ways, God wants so be nothing like his father. You learn that God’s father can do whatever he wants and can get whatever he wants. Which can be both good and bod for God.

Another thing you find out about God is that he doesn’t really care of he joins the Elite Seven or not, he’s only doing it because of this father.

On the night when God was competing his task given to him by the Elite, he hits an innocent girl walking home from work. While she is in the hospital, God refuses to leave his side. Everyone tells him to give up on her, but he can’t give up on this girl, even though he doesn’t know her.

How will this girl play into God’s life? Will she be able to change him for the good or will she end up being used against him?

This book is about change. Changes God makes in his life. Changes that are happening in the Elite.

HOLY COW!!!! There is a scene in this book that I was so excited about. When you read the scene, you will understand.

I like how this book was dual POV. Most of it was form God’s POV but some of it was from the mystery girls POV.

K. Webster did a great job with this book. I felt that the character development was spot on. I don’t think she rushed the story at all and I feel that she did a great job getting us ready for the next book, Sloth.

Can’t wait to read the next 2 books and see how it ends.

This story between Max and Emily is a cute, quick, insta-love.
Max and Emily know each other from years ago when Max worked with Emily’s now deceased husband.
He always had an attraction to her but knew it was wrong because she was married.
Now 7 years later, he has his chance.
But what happens when things get complicated because he is moving but her life is in New York.
This was a cute, easy read.

This is an enemy to lovers’ book and I think it was great. I like that Camryn and Flint did not have an insta-love. That they had to overcome obstacles and didn’t just automatically get together.

Camryn is a teacher (which I love because I am a teacher) and Flint is a school resource officer. Flint has no idea why Camryn wants nothing to do with him. But when you find out why, you will understand her reasoning more.

What ends up bring them together is CrossFit. They end up working out together and their bond forms from there. And they are so cute together.

They end up helping each other get over fears and injuries. They help each other see what they both deserve in life.

Of course, there are some villains. And I feel like this book had more sex and sexual stuff than other books. Maybe not, but I felt there was more details in this book.

I just really enjoyed reading this book and I’m ready for the next one in the series.

We first meet Eleanor and Grey when they are young, teenagers. Eleanor is a loner, always reading and ignoring people. Grey is a jock, always popular and everyone loved him. When they run across each other at a party, they end up forming a bond that they never imagined.

Eleanor is going though a lot in life. Her mom has cancer and it has turned her life upside down. Grey realizes this and decides to be the bright spot in her world. He helps her take her mind off of the cancer and becomes a reason for her to smile.

But of course…… as soon as they start to have feelings for each other, Eleanor ends up moving away. Grey of going off to college and Eleanor doesn’t want to hold him back by being in a long distance relationship. They say they will stay in touch but the slowly drift apart.

About 15 years later, they meet again.

This time, Eleanor is interviewing for a position as a nanny. What she didn’t know was that the children she would be taking care of were Grey’s kids.

Their first interaction in years was not very pleasant. Grey was distant, short, and honestly not very nice. Eleanor finds out about Grey’s past, what he and his daughters have been thought. She is heart broken for him.

After some time, Eleanor realized that she needed to do for Grey and his family what he had done for her in the past, become a reason for them to smile.

Some family members were easier to through to than others. Grey and his oldest daughter Karla were hard eggs to crack. But once she started to get through to them, things started to change.

I really enjoyed this book. Brittainy has a way of breaking your heart and then putting it back together. She is a master as story-telling.

This book is about loss and love. About forgiveness and acceptance.

I loved Eleanor’s mom. She was such a wonderful character and she raised Eleanor right. And Grey’s daughter Lorelai was so wonderful. Even though she had been through so much tragedy at her young age, she was full of life.

Such a wonderful read!!

This book….WOW! I have been waiting for this story forever.

This book has a lot my mystery behind it and if you haven’t read the other books in this series, you might not understand everything that is going on in this book.

Theo comes from a crazy family and once you find out who her family is, you understand. She has been thought some crazy things in her life and it all has to do with power and money.

Liner knows that something about Theo is off. He know that something he saw in the past is now connecting with his present and he has to find out what it is.

Without giving the story away, I wanna say that I loved that Liner never gave up on Theo. That he did what he needed to d to keep her safe and to make sure that she knew someone was there to support her.

This story is kind of out there. But you have to remember this is fictional and not true.

Overall, I really enjoyed this story. I loved the slow burn that the characters had and I think some justice was served for some of these characters.

Valerie has been dealt a few bad hands.

First, her and her fiancé break up. Then she is laid off from her job. What else could go wrong?

So when her sister invite her on a trip to Ireland for New Years, she decides why not. Nothing here is holding her back.

What she never imagined was that she would meet Padraig, an Irish rugby player. Or that he would give her a crazy proposition.

When he encounters Valerie at a pub in Ireland, and things go to the next level, he figures there is no one better to ask to be his fake fiancé for a few days. Convince his father he is in love and then leave.

But of course, things don’t go as planned.

As the book progresses, real feeling get involved. Lies are told. Lies are uncovered.

Can Valerie deal with the lies they are telling once she gets to know Padraig’s family?

What happens when things go south and Padraig makes a big mistake?

I think a lot of people will LOVE this book and that they will give it 5 stars. But for me, I just could not do it.

This is the rest of Kael and Skyla (Paige)’s story that started in From the Ashes.
You learn about what Paige went to when she was at Caged.
You learn what caused Kael to change his ways.
You learn how they lived life after until they found each other again and what happened after.

The reason I gave this book 3 stars instead of 4 was because I felt it dragged on a bit too much.

But overall, I still enjoyed the book! 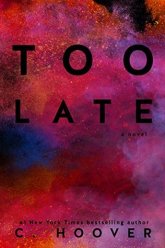 I just finished this book and I’m not really sure about it.

There are three characters, Sloan, Carter(Luke), and Asa.

Sloan is in a relationship with Asa that she doesn’t think she can get out of. She feel trapped for more than one reason. But she does what she has to do in able to provide for her brother.

Asa knows he has a hold over Sloan. In his own way he loves her but it is not a healthy love. He doesn’t know what love is and doesn’t know how to show it.

Carter, an undercover cop, first sees Sloan in a college class and has no idea that she will play such a large role in his undercover assignment.

There is kinda of a love-triangle here, but Sloan doesn’t want to be with Asa in the first place.

Carter is a good guy, with good intentions and I liked him.

I liked the book but I think it dragged on.

It does touch on some hard subjects, but it isn’t as “dark” as I feel it was talked up to be.

I will continue to read Colleen Hoover, but this was not one of my favorite books of hers.

Sebastian is one of a kind.

After his parents died, Sebastian went to live with his uncle, who was not an upstanding citizen. Once he was with his uncle, he never wanted for anything. Except for love. He always wanted to be loved.

When his uncle gave him an ultimatum after an accident, go to college at St. Augustine college and find a way to join the Elite Seven, Sebastian really had no other choice.

Sebastian finds his way into the Elite Seven but it’s not all roses for him. And it gets more complicated when he meets Sabella, Sam’s sister.

Sebastian is Envy for many reasons you will learn about as you read.

The reason I gave this book 3 stars was because I didn’t connect with Sebastian. He was an asshole and there was absolutely no part of him that I liked. Sometimes I like the bad guys, but not this time. 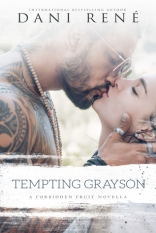 This is a novella, took me about 1 1/2 hours to read with some interruptions.
Mila has always had a thing for Grayson. He’s older, handsome, and sweet.
Problem? She is her step-dad’s brother.
Grayson know he shouldn’t want Mika but he does. He knows it’s wrong and that they should stay away from each other. But that doesn’t work.
So….. I love Dani Rene and she knows it.
But I just could not connect with this book or the characters. The idea behind the book was very good. It’s a taboo that isn’t totally crazy and people like that kind of taboo read. I just could not connect with this book