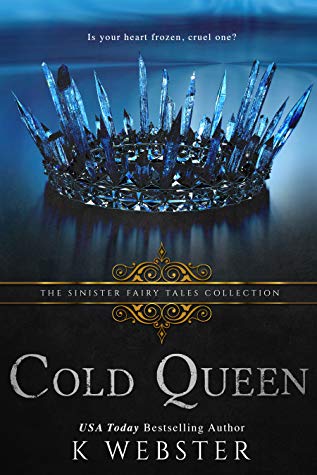 In a cold, empty castle, a young queen is dying.
Weak. Fragile. Disgraced.
But Queen Whitestone is not alone in her final days.
She has her beloved sister.

Until a wicked king rides onto her land.
Arrogant. Insufferable. Demanding.
King Bloodsun has come with an offer…peace in trade for a bride.
He wants the princess.

The fiery king won’t take no for an answer.
He vows to keep the cold queen captive until she gives in to his demands.

A queen bows for no one, though.
Not even when she’s frail and fading away.
She’ll tap into her strength, protecting the only family she has left. 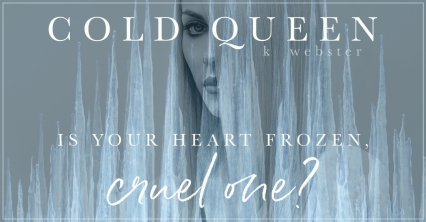 So this twisted fairy tale seemed to have a play off of Elsa and Anna but I also felt a little Game of Thrones.

Queen Elzira (Queen Whitestone), and her sister Yanna have been on their own since Elzira was 15. After their parents death, Elzira was thrown into the role of queen. Her sister is her life. What she lives for. But, she is dying and no-one knows how to stop it. She is losing her powers and her life.

“Trust your instinct. Trust only yourself. Trust in the cold.”

Ryke (King Bloodsun) has come to make a pack. He wants to marry the queens sister Yanna and then move thought their land and take Hidden Lands. But in order to do that, he needs the queen on his side. What he didn’t realize was that the queen was dying. He also didn’t realize that he could care that she was dying. One thing about the Ryke is that he is also the “Truth Seeker”, he will always find the truth.

“You can’t warm up what doesn’t want to be anything but cold.”

Ryke is determined to make Elzira better, even if she doesn’t like it. And spending that time together causes them to become closer.

But what about his plan to marry Yanna? What about his feelings for Elzira? What happens when he realizes what is going on with Elzira?

I felt that this was a really good book. I like how I could see multiple different stories in this one. I knew K. Webster would not disappoint me.

This book does mention some tough subjects, so far warning. 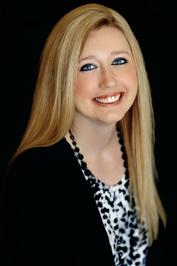 Her other passions besides writing include reading and graphic design. K can always be found in front of her computer chasing her next idea and taking action. She looks forward to the day when she will see one of her titles on the big screen.

Can’t find a certain book? Maybe it’s too hot for Amazon! Don’t worry because titles like Bad Bad Bad, This is War, Baby, The Wild, and Hale can all be found for sale on K’s website in both ebook and paperback format.
Website: www.authorkwebster.com
https://www.authorkwebster.com/newsle…